Image Credit: Izvor Twitter On Thursday night, a tornado followed by a thunderstorm hit South Moravia in Czech Republic leaving a trail of destruction. The regions of Breclav and Hodonin […]

49 workers confirmed death in the sinking of barge P305. Hopes fade for the last 26 workers missing.

Image Credit: AFP The number of bodies recovered reached 49. Most of the survivors or bodies have been sent to Mumbai. Last Monday, cyclone Tauktae struck the Arabian Sea in […]

Image Credit: Twitter/@indiannavy Twenty-two workers have been confirmed dead after their bodies have been recovered by the search and rescue team. The workers that used to work on Barge P305, […] 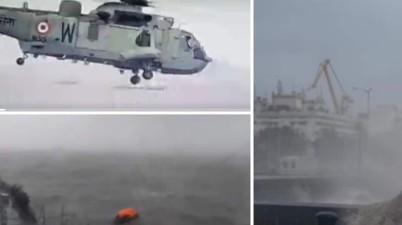 Image Credit: asianetnews Barge ‘P305’ sank on Monday evening in the Arabian Sea after it was impacted by cyclone Tauktae. The barge sank near the Bombay High off-shore oil rigs. […]

Image Credit: Japan Meteorological Agency website. Japanese authorities issued a tsunami alert after a 7.2-magnitude earthquake struck Japan, off the coast of Miyagi. It has been reported that a one […]

Thousands of people evacuated after multiple volcanoes erupt in Indonesia.

Image Credit: Reuters Early on Tuesday, another volcanic eruption by Mount Semeru was reported. Several villages in the vicinity were covered by ash and sulfur. The volcano is the highest […]